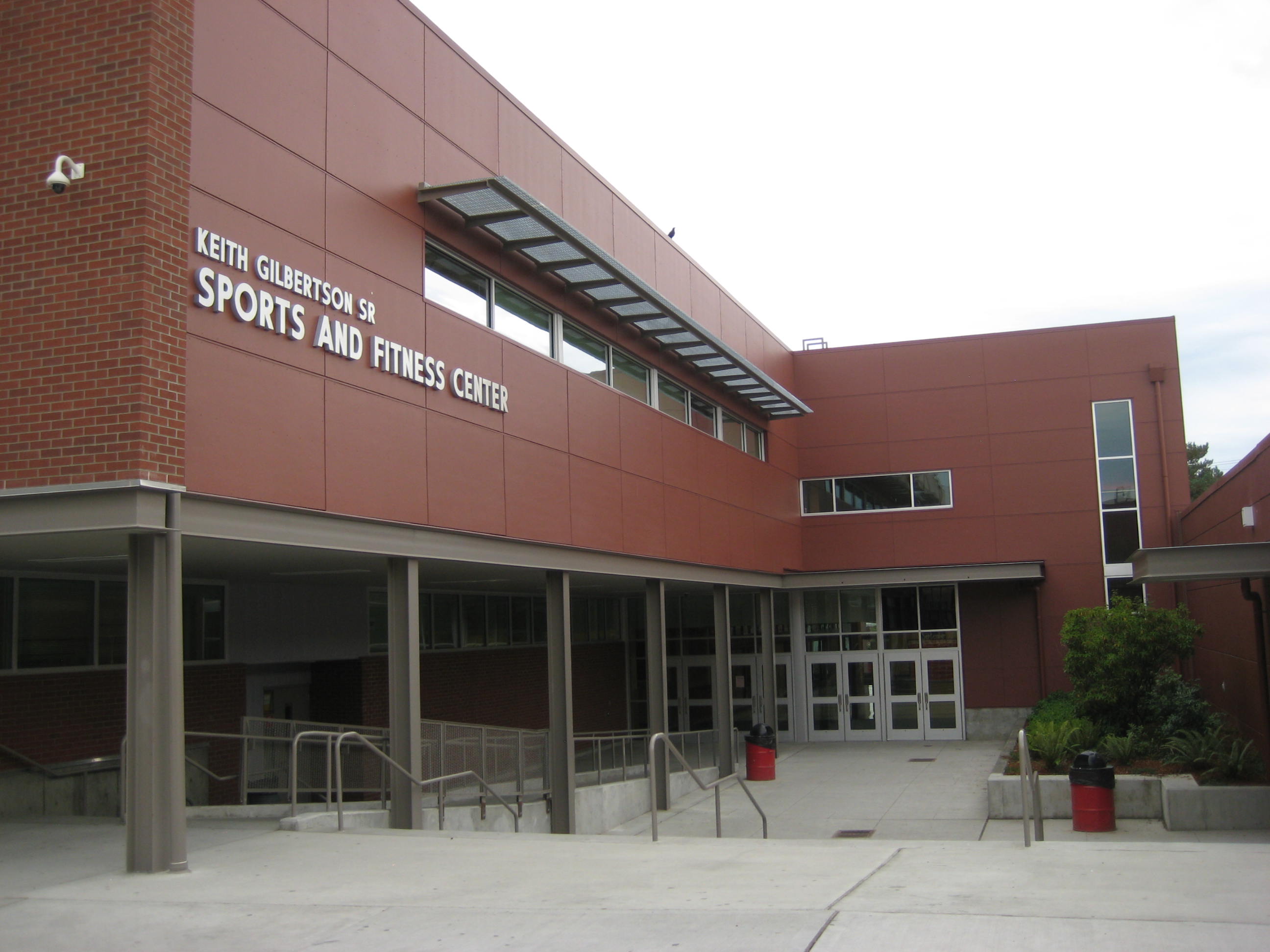 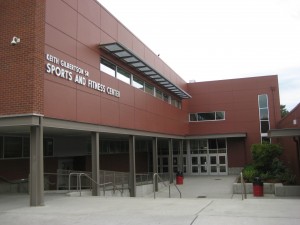 Thousands of Snohomish High School students and athletes will long remember their association with Keith Gilbertson Sr., and thanks to an action by the Snohomish School Board, thousands more will be linked to the legendary high school coach and educator.

The schoolâ€™s one-year-old sports and fitness center has been renamed in honor of Gilbertson, who died in February at age 83 after a 61-year career as an SHS coach and English teacher, including the past 3o years as an unpaid assistant coach in football and both boys andÂ  girls basketball.

With the lettering already in place on the Keith Gilbertson Sr. Sports and Fitness Center, the Snohomish School Board formally adopted a resolution on the renaming of the facility during Â its Sept. 28 meeting. Gilbertson also willÂ be honored duringÂ halftime of the Panthersâ€™ Sept. 30 football game against Monroe at Veterans Memorial Stadium.

In addition to his on-field coaching expertise, Gilbertson earned a reputation as a conditioning genius and was also widely viewed as a mentor and role model in both education and athletics. The idea to rename the fitness center in his honor came from Snohomish School District athletic director Mark Albertine and SHS football coach Mark Perry, both longtime Gilby coaching colleagues.

â€œHe was a stickler for doing things the right way,” Albertine says ofÂ Gilbertson in theÂ Snohomish Country Tribune. â€œHe held himself to a higher standard and he expected the players to do the same. So with that mind-set he really epitomized striving for excellence, striving to be the best that you can.â€

One of four speakers to address the school board prior to its passing of Resolution No. 16-11, Â Perry declared the renaming effort a wide-ranging affair. “Everyone in the community made this happen,” he said, citing letters of support generated from fellow coaches, SHS administrators, SHS students and student-athletes. 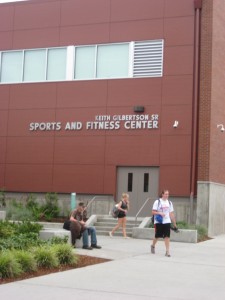 This is a north view of the Keith Gilbertson Sr. Sports and Fitness Center at Snohomish High School. (Keith Olson photo)

Clay told the school board that the SHS student body fully endorses renaming the fitness center in honor of Â Gilbertson.

“He was the grandpa I never had,” Â Benson said to underscore the close relationships Gilbertson developed with players on the girls basketball team in the latter part of his coaching career. “What made him great was his training style. What made him legendary was how he cared for the athletes.”

Utt recalled knowing Gilby as a teacher, coach, colleague and friend and shared memories of a Christmas card he received from Gilbertson during his senior year at SHS after the Panthers had won their first state football championship. Â “He wrote the usual things, but what stuck with me was something he wrote at the very end: Â ‘Thank you for giving me the opportunity to be your coach.’ Â I still remember that 35 years later, and I still have the card. He was one of a kind.”

School board member Jay Johnston said of Gilbertson: Â “He was so inspirational. We’ve had a number of great coaches at Snohomish over the years, but he went way beyond what anyone else has done.”

SHS principal Beth Porter told the board members, “His dedication to Snohomish High School is unmatched.”

As an ongoing tribute, the Snohomish Education Foundation has launched a fundraising effort to endow a perpetual Keith Gilbertson Sr. Memorial Scholarship at the high school. Check out CoachGilb.org for details about two four-year, renewable $1,000 scholarships to be awarded starting in 2012, or to see stories and photographs from Coach Gilbertsonâ€™s legendary career that endeared him to many and earned him enshrinement in multiple halls of fame. To donate to the endowment effort, click here. 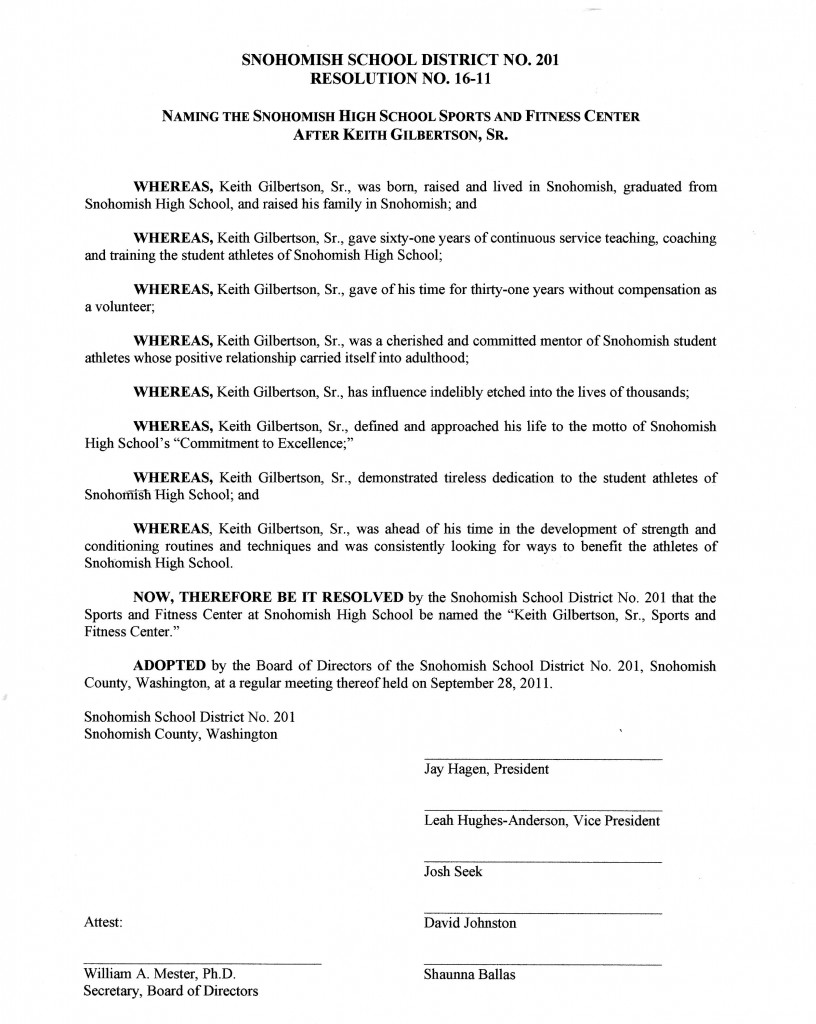