Although he was never a head coach in basketball at Snohomish, Keith Gilbertson Sr. still had a profound effect on Panthers hoops over the past five decades.

For 30 years, Gilby coached boys basketball as the junior varsity coach and varsity assistant under head coaches Jack de Kubber, Jim Adams and, for one year, George Fowler (1992). He joined de Kubberâ€™s staff in 1966 and within five years helped produce four consecutive Northwest AA League championships and as many state postseason berths, culminating in the Panthersâ€™ lone state title to date in 1970 in what was also Snohomishâ€™s transition year to the Class AAA ranks. 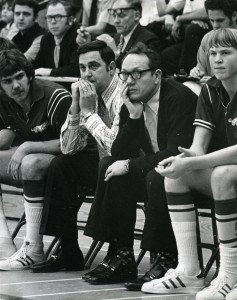 Gilbertsonâ€™s role as jayvee coach warrants particular notice, as he took the lead in developing nearly all the future varsity talent from 1966 thorough 1981. His 1969 jayvee bunch went 20-0 and supplied three junior starters for the state titlists the following year.

â€œKeith and I spent more time together off the court than on the court,â€ de Kubber said in 1993 in a letter supporting Gilbyâ€™s nomination to the SHS Hall of Fame. â€œWe spent many hours preparing and planning, watching super-8 film during weeknights and most anytime Saturdays and/or Sundays. I would give him or he would come up with ideas, especially on offense, on which he would spend many hours with Xâ€™s and Oâ€™s, always keeping the playersâ€™ capabilities in mind.

â€œHe not only prepared sophomores and juniors for the varsity, but he would spend time before, during and after practice with the varsity kids, making them better.â€

The coaching took place both on and off the court, according to Jerry Ingalls, co-captain of the 1970 Panthers. And Gilbyâ€™sÂ presence perhaps had no bigger impact than on the grandest stage ever for SHS hoops.

â€œI have many memories of Coach G coaching. From the moments he spent instructing me and others before practice began to afterwards when he might take you aside to inquire to personal matters that were affecting attitude on the court,â€ said Ingalls, now a building contractor and farmer in Hawaii.

â€œBut I think if there were one memory to share it was at halftime of the high school championship game. We had overcome an early deficit and were back in the game. Maybe it was because we were underdogs, but there seemed to be an almost celebratory atmosphere in the locker room and a lot of cheerleading that went on â€“ for what I thoughtÂ too long â€“ without direction.Â  Coach G was given the floor, and when he did he didnâ€™t smile and applaud us. He picked up a piece of chalk and began to draw up a plan for the second half. For me, it was the steady voice that helped us focus on the target.â€

The second half and overtime periods of the game can be viewedÂ here – special thanks are due Coach Jack de Kubber who tracked down the film and Michael Edwards who digitized and posted it. 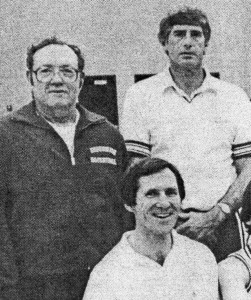 After retiring as a teacher in 1981, Keith Gilbertson Sr., left, continued to coach the SHS boys basketball team as a varsity assistant for head coach Jim Adams, right, while George Fowler, front, took over as junior varsity coach. (SHS photo)

After the state championship game, while team members basked in glory at a townwide victory celebration, Gilbertson avoided the spotlight, slipping off to solitude and reflection on the SHS football practice field.

â€œI just wanted to get away by myself to savor the moment,â€ he later said.

â€œIt wasnâ€™t while I played and was taught by Coach G, but later when exposed to other coaches and environments that I realized his special attention to details of the individual athlete. He didnâ€™t generalize,â€ Ingalls said. â€œHe took the time to study the individual and give support to the drills that would benefit that person. The smallest details could later be manifested in a quicker step to the basket, or better position for a rebound or a more secure inbounds pass or the confidence to make a free throw.

â€œI only saw Coach G a couple of times in the past decades, but the lessons I learned from him have lasted longer than the ability to be a good athlete. Often, and sometimes daily, his message of the value of character has continued to guide my better judgement. Every challenge I face, I am reminded of his determination to instill confidence in us all through success as a student/athlete.â€

Snohomish also won its first Wesco hoop title under de Kubber and Gilbertson in 1977.Â  Gilby then joined Adamsâ€™ staff and remained through the 1994-95 season, helping Adamsâ€™ 1985 and 1987 squads earn fifth-place finishes at the state tournament. He then began coaching girls hoops.

In Gilbyâ€™s last season as boys jayvee coach in 1980-81, the team went 19-1. The next year, his first as a volunteer assistant after his retirement from classroom teaching , he suffered a mild stroke but missed only five weeks and returned to help coach the Panthers in the postseason.

Like so many before him, Adams considered Gilbertson a role model and an inspiration.

â€œI doubt there is a coach anywhere who is more dedicated to kids than Keith Gilbertson,â€ Adams wrote in 1993 in another letter to the SHS Hall of Fame selection committee.Â  â€œIn addition to the countless hours he spends in direct contact with the young athletes, he also spends even more time communicating with former players by letter and telephone calls. He cares about the young people after they have put in their time at Snohomish High School. He has a remarkable ability to recall events of past years, which is further indication of his total and complete commitment to the athletes he has worked with through the years.â€ 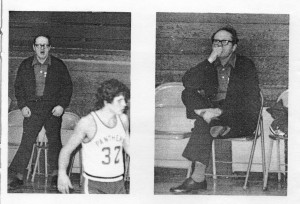 Two views of coach Keith Gilbertson Sr. during a Snohomish junior varsity basketball game, reacting to action on the floor, left photo, and contemplating his next move. (SHS photos)