â€œI love the Hour of Code program. This is my 5th year doing it, and each year is better and better. I like to start early now, instead of waiting until the December Kick off, because I challenge my students to do more, and I love to see what they can do! After the Hour of Code, most students do many activities on Code.org, they begin coding on another program called Scratch.com, and some even create games and programs on Khan Academy programming. So, I start early in the year, I post their certificates on the wall, and the students continue to grow throughout the year.â€ Â â€“Matt Lawson, Teacher Seattle Hill Elementary 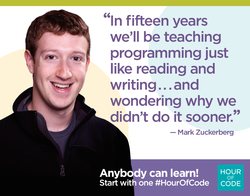 The Hour of Code organized by Code.org, a public 501(c)(3) non-profit, is dedicated to expanding participation in computer science by making it available in more schools, and increasing participation by women and
underrepresented students of color. The Hour of Code is a global movement reaching tens of millions of students in 180+ countries with tutorials written in over 40 languages for students ages 4 to 104.

This event provides a one-hour session for instructors to expose students
in order to spark their interest in computer science topics no matter what field of study they eventually choose. With many Hour of Code themes to choose from, a wide variety of students of all ages can find something of interest to them, whether it is coding with Anna and Elsa from Disneyâ€™s Frozen, coding a Star Wars galaxy or coding the tutorial built around Microsoftâ€™s Minecraft.

This fall, each foundation sponsored an instructor information night within their school district bringing together teachers and librarians to learn and share with each other about the Hour of Code curriculum. Additional incentives provided by the respective foundations were offered to instructors that conduct an Hour of Code with students at their school, in order to encourage and reward instructors for participating.

To find out more about the Hour of Code movement clickÂ